What determines whether a visual input becomes conscious or not? A powerful paradigm to study this question is binocular rivalry. If one stimulus is presented to one eye, and another to the other eye, one perceives only one of the stimuli at a time, with perceived stimulus switching on the order of seconds. Since the physical input stays constant and only the conscious percept switches, binocular rivalry provides an entry point to study how internally generated, conscious interpretations of ambiguous scenes arise. The macaque face patch system provides a powerful preparation to study the neural correlates of binocular rivalry, due to its specialization for faces and hierarchical connectivity. Where does the switch in activity reflecting consciousness first occur? How is it propagated across the brain? 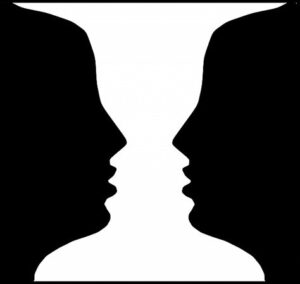 The face vase illusion. Consciousness alternately switches between a vase and two faces. We are using binocular rivalry, another type of bistable display, to study brain dynamics during switches in consciousness.